Schinousa is an island of Cyclades, on their south-east complex. It is the 27th island in size of Cyclades and the one from the four small islands being next to Naxos island.
Schinousa, though it is one of the smallest islands of Cyclades seems that perhaps it has kept its name, since the ancient times if we accept that it comes from ancient Ehinousa. If in another way, we accept that the site name, Schinousa, comes from the abundant rushes, being in the island, then there is a phonetic coincidence, between the ancient name Ehinousa and the middle age’s name, Schinousa, which was identified and kept in the today’s name Schinousa.
Schinousa has been resided since the ancient times. The ruins from housings in different parts are providing an unceasing presence of residents in the island. Today, the most of population is in two villages: In Hora (Panagia) and in Messaria.

Its shape is of many splits with many roadsteads and small peninsulas. The island’s highest height is at Vardies hill with 133 meters altimeter. Its ground is normal. Normal sides, normal hills and small valleys. In consists of slates, lime stones and sand stones. Its earth is fertile and it’s cultivated in its most areas.

In front of the mountain volume Naxos the low hills of Schinousa with their softness consist a contrast in the area. Soft lines crossed out in the sea, from many roadsteads and small roadsteads in comparison with the small extent of Schinousa. 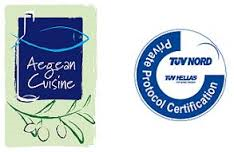